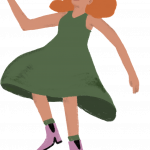 I first used intravenous drugs when I was 14 however my tendency toward addictive behaviours had manifested far before then… Be it the odd cigarette tentatively snuck in after school, stealing from Supré, toxic relationships – I’ve engaged in a multitude of self destructive, cyclical behaviours for almost as long as I can remember. When I first injected drugs, I hadn’t the slightest understanding of how far reaching the implications of my choice would be. To me, my first experience with IV drugs disproved years of drug education by solidifying that I hadn’t instantaneously become a ‘junkie’ the moment I touched a drug or a needle. For many years my drug use stayed quite sporadic (recreational if you will) but I’d made a dangerous commitment to dismantling the taboo around injecting drugs that still haunts me to this day. That’s not to say that injecting drugs is inherently ‘bad’ or ‘wrong’ but I believe it’s something that functionally requires a lot of self-responsibility, insight and connection to be a non-invasive part of everyday life.   Those things have always been illusory to me, in spite of my best efforts I simply cannot be a functional, responsible drug user.

From the first day I shot up, I began to rethink the paradigm society associated with hard drugs. Rather than understanding that IV drug use is a complicated issue that shouldn’t be reduced to mere personal preference I preached about how I was perfectly functional, far from addicted and very happy. I often told people that just about anyone could achieve the same successes while using IV drugs. The unfortunate truth is my own ideas about addiction, drugs and drug policy were far from perfect and ended up influencing a lot of other young people negatively – propelling them rapidly toward the same fate that awaited me. Even now I spend a lot of time refining the ideological beliefs I grew up developing around my newfound identity as a person who used and enshrined drugs.

In spite of my avid activism and support for PWID (people who inject drugs), I understand the inherent risk involved in using but that was a conclusion which took me all of five years to draw.

During the infancy of my habit I was very secretive about my using. I didn’t enter needle exchanges on my own. I almost always had friends pick up for me… I had an unhealthy dependence on older more savvy people in my community. Adolescence was such a tumultuous and formative time for me in spite of my substance use but instead of beginning to forge an identity through friendship, hobbies and interests I forged an identity which was almost entirely synonymous with my substance use.  As I got older I began to crave attention like that which the incredibly confronting nature about my substance use often espoused. It was never positive attention – on the contrary it was almost entirely negative or at best sympathetic.

By the time I was 17 I’d moved out of home and my chippy (small, non-invasive drug habit) had become a fully fledged, compulsive heroin and amphetamine dependence.  It was when things began to spiral out of my control that I became very secretive once again. While all of my friends were kicking goals at university, I was delving deeper and deeper into poly substance use with reckless abandon and disregard for my life.

At 18 I was accepted into my first choice university and after a stint as a pimp to my twisted, predatory morphine dealer and several weeks in acute withdrawal I decided to put the needle down in order to focus on more beneficial pursuits. If only it was that easy, I’d yet to understand the nature of lapse and relapse and re-relapse and re-re-relapse and re-re-re-re-relapse until you’re whittled down to a husk of your former self.  I was quite optimistic about staying abstinent without any peer support, without any counselling and without investing any time in personal improvement. I thought, foolishly that just like when I intermittently used my drugs of choice I’d be able to simply quit.

In lieu of intravenous drugs I quickly rediscovered and revelled in the social acceptability of alcohol. I didn’t have to hide my drinking initially and as a socially encouraged activity I was able to feed off the same clout I so desired as a drug user. I enjoyed being cheered on as I chugged litre bottles of vodka in front of impressionable students but ultimately my tendency toward overindulging reared its ugly head once again. Mid way through my first year in university I experienced alcohol withdrawal, alcohol poisoning and arrests for drunk and disorderly behaviour. My body was rapidly deteriorating and although I was able to identify that I had a problem I had no choice but to drink throughout the day to stave off shakes, chills, anxiety and violent sweats.

Mid way into the year when I turned 19 I decided in all honesty, that I’d prefer to use opioids and benzodiazepines-  desperate to fill the void in me that seemed only to be satisfied by substances taken in such excess that they harmed my brain and body. I started doctor shopping in an attempt to walk a precarious middle road but in the end, as always, my addictive behaviours manifested and before I knew it I’d become reacquainted with morphine and the needle.

I met my husband-to-be just before my 20th birthday and desperate to turn a new leaf after witnessing the massive lateral impact my substance use was beginning to have on those around me. To this end I booked myself into a detox to recover from Xanax dependency and planned a trip to the United States.

After moving to the United States to be with my boyfriend, I quickly realized that both of us had kept a past of substance use from each other in a bid to maintain our miraculous relationship. We both suffered terrible chronic pain and mental illness and the combination of these three things was the ‘perfect storm’. At the age of 20 my intravenous drug use accelerated once again to an extremely dangerous pace. Since the cost of drugs in the US was comparatively so low I could help myself, still convinced I was using opioids in order to manage pain I sent myself on a path of destruction using Heroin, Morphine, Hydromorphone, Fentanyl, Methamphetamine and Ketamine often in combination and always multiple times – daily.

My dream relationship began to crumble as we moved around the US looking for our next fix instead of looking out for each other. I was married while on the brink of Heroin overdose, darting in and out of the couples’ suite to shoot up during the procession.

I finally started coming to terms with the fact that I was totally, totally out of control and in a country with strict prohibitionist policy and a distinct lack of harm reduction services. I realized that I was truly alone…

By the time I was 21 I’d had two abscesses, osteomyelitis, rhabdomyolysis and over 13 near fatal overdoses. I was emaciated, miserable and incredibly self critical. I wanted help but having overstayed my visa and in the clutches of a co-dependent relationship I wasn’t able to reach out to anyone.

Eventually I had to leave the United states under threat of deportation but my substance use did not abate.

My late husband had finally put the needle down with the help of his family and the stability of a full time job. For me things were not so easy, having been distanced from my husband who could not bare to look on as I obliterated myself I yet again found myself in the clutches of isolation so overwhelming I felt I had nothing in the world except my drug of choice. My habit yet again spiralled out of control to the effect of another 17 overdoses, suicide attempts, homelessness and loss of self.

Throughout this time, I wanted more than anything to win back the trust and affection of my husband and checked myself into a rehab as a defeat of dedication. I successfully completed my rehab program, turning 22 while at a residential facility. The day I walked out of rehab I received a message from my mother in law – my husband had died suddenly at the age of 22… It was an Earth shattering moment and left without coping skills, a support network that I clicked with or professional help I took up using heroin again to numb myself to the grief I felt.

As 2020 is now on the horizon life is quite different, I’ve networked with peer supports, professional supports and harm reduction organizations. I am no longer homeless. After a month long mental health admission I am finally medicated. This has created a stable foundation which allows me to grow, learn and process. I began to use very infrequently toward the end of September in 2019 after I fell out with my brother – one of my biggest supports and idols. I was reminded again of what I stood to lose if I continued to irresponsibly use drugs. Having already lost the love of my life the thought of losing my brother too was truly sobering. As it stands in late 2019 at 22 years of age I have been abstinent from my drug of choice for several months and I am truly proud of the growth that has eventuated in my personal life. Although relapse is a term of having a substance use disorder I am not afraid, I know I have the skills to help myself and the insight to reach out to others when I can’t.

Growing up addicted has been a response to (and sometimes the root cause of) many traumatic experiences. More than anything else I have learned that growing up addicted does not make anyone less of a person. While I certainly have more growing to do, in many ways I am thankful that I have had the opportunity to grow from having a substance use disorder. There is very little certainty in the future but I can safely say I’m happy with myself, I am at peace with my substance use disorder.